Get to Know Your Decaf

The first decaffeination process took place around 1903 when Ludwig Roselius used the chemical benzene to decaffeinate coffee. Though you may have seen the words “death before decaf” floating around the coffee scene, the industry doesn’t actually want to cause anyone harm. The use of benzene was found to be potentially toxic so it is no longer used to decaffeinate coffee today. Despite its potential toxicity, it did pave the way for the exploration and evolution of future methods because of how Roselius used water and a solvent to draw caffeine out of the bean.

Unfortunately, because of how the process works, decaffeination tends to remove more of the unique coffee flavours than decaf drinkers might like. However, our ever-resourceful colleagues in the coffee industry have developed ways to mitigate this, and are continuously working to keep flavours in while still safely getting caffeine out. At Propeller, you’ll most often find Swiss Water® Decaf (SWD) on our shelves. The SWD process most closely aligns with three of our core values relating to Quality (consistently great tasting), Sustainability (zero chemicals = no harm to coffee lovers nor the environment), and Community (it’s an industry leading company based in Vancouver!). And in our experience, the SWD approach best maintains the integrity of the coffee, leaving our roasting team the opportunity to highlight the unique flavours of the decaf beans our sourcing team get for us. Some of you may also remember various iterations of the Sugar Cane Decaf (SCD) method we’ve carried in the past. SCD is another natural way to decaffeinate coffee that emphasizes flavour retention. It is also quite popular in the specialty coffee industry and if we find a great one - you may see it in our lineup again. So how exactly is caffeine removed from coffee? Without getting too technical, all  decaffeination approaches require green coffee beans (unroasted coffee), water, a solvent or solution for the caffeine to bind to, and time. The majority of decaf coffee is made using ethyl acetate or methylene chloride. These are both synthetic chemicals, although there is a natural version of ethyl acetate we will discuss in more detail below. Though there is some concern among coffee consumers that methylene chloride can cause harm, studies have shown that it vaporizes at temperatures of 40°C (104°F). Since coffee is roasted at temperatures upwards of 187°C (370°F) and brewed at around 90-100°C (194-212°F), no more than trace amounts, if any, have been found to remain in coffee decaffeinated with this solvent. However, the approach remains controversial in some circles and for those who prefer their coffee to be chemical free, selecting SWD or another organically labelled decaf is your best bet.

The solvent methods are typically applied in one of two ways – indirectly or directly. In the indirect method, green coffee is soaked in water near boiling for many hours, which withdraws caffeine, and other flavours and oils from the beans. The water is separated and transferred to another tank where the beans are washed for about 10 hours with either ethyl acetate or methylene chloride. The caffeine bonds with the solvent and the mixture is then heated to evaporate out both the caffeine and the solvent. The now decaffeinated green beans are mixed back in with the original liquid to reabsorb flavours and oils previously extracted in the boiling process. The beans are bagged up, sold, and are ready for roasting.

In the direct method, green beans are steamed to open their pores and then repeatedly rinsed with ethyl acetate or methylene chloride to remove the caffeine. After about 10 hours the caffeine-laden solvent is drained and the beans are steamed again to remove any remaining chemicals. These techniques work to maintain the flavour potential of the bean by recombining recently decaffeinated green beans with the flavours and oils extracted at the start of the process, thus helping to produce a more enjoyable cup of decaf. 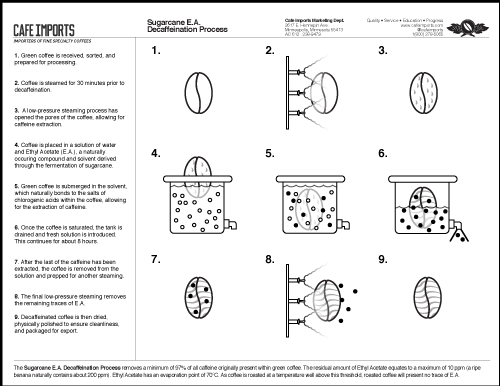 Leading the way in terms of flavour retention, however, is the Swiss Water® approach. What makes this approach so unique, is that the Swiss Water® company has developed something called green coffee extract (GCE). GCE is a solution created by soaking green coffee in hot water, whereby the soluble solids leach out of the coffee. The coffee used to make this GCE solution is then removed and disposed of, and what’s left behind is put through carbon filters to remove only the caffeine. The result is a solution, which, because it is extracted from green coffee itself, contains all of the naturally occurring water-soluble solids found in coffee – carbohydrates, amino acids, and other organic compounds and minerals – but not the caffeine. This solution is called GCE. Using GCE in its decaffeination process means that the Swiss Water® approach is able to maximize flavour preservation because it does not remove the other compounds that help give each green coffee its unique flavour characteristics. It is also natural and free of chemicals and solvents.

The Swiss Water® process, though originated in Switzerland, actually takes place in Canada. Coffee roasters from around the world send their green coffee to Burnaby, British Columbia to be decaffeinated because of the process’ unique ability to maintain the quality and coffee characteristics developed at origin. Water from the Coast Mountains of British Columbia is added to small batches of green coffee and GCE. Together, the water and GCE start the process of moving the caffeine out of the coffee bean as it attaches itself to the green coffee extract. The caffeine and GCE move continuously through carbon filters until 99.9% of the caffeine is trapped and separated from the GCE. The process takes an average of 10 hours to complete and requires careful monitoring of time, temperature controls, and levels of GCE flow. The GCE solution itself can be used again and again as it is constantly filtered through the aforementioned carbon filters and routinely monitored for quality retention throughout the process.

Though the Sugar Cane decaf process uses the solvent method, like the Swiss Water® approach, it is also a natural decaffeination process. Developed and carried out in Colombia, it uses either the direct or indirect ethyl acetate solvent approach described above. However, if a decaf coffee is designated as specifically Sugar Cane decaf, the ethyl acetate used is obtained as a naturally occurring by-product of the sugar cane fermentation process. Developing the ethyl acetate solvent begins with the fermentation of molasses derived from sugarcane to create ethanol. This ethanol is then mixed with acetic acid (the main component of vinegar), to create the compound ethyl acetate. As such, it uses a natural version of the ethyl acetate compound, rather than the synthetic versions commonly used in other decaffeination approaches. Since the ethyl acetate comes from sugar cane and is an organic compound that is effective at removing caffeine, the flavour attributes of the coffee are less likely to be extracted during the decaffeination process and the resulting decaf coffee will be slightly sweeter thanks to the natural solvent.

Perfecting and improving the decaffeination process remains an ongoing mission in the world of coffee. New methods continue to emerge, especially ones that seek to maximize flavour retention and eliminate the need for unnatural additives or inorganic compounds. Though we’ve found the Swiss Water® process consistently effective in its ability to remove caffeine and preserve flavour, the Mountain Water Natural Decaf Process out of Mexico and the CO2 Method out of Germany, offer promising additional options. With new and emerging processes and ongoing experimentation, decaf drinkers should be reassured that the coffee industry is always working to make your cup of coffee as good as it can be.

Looking for something new? We’ve got an organic Swiss Water® decaf from Mexico roasting soon, with notes of hazelnut, chocolate and cherry. Why not give it a try the next time you’re craving a delicious coffee but don’t want the buzz.